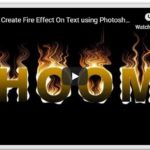 Creating Fire Text in Photoshop CS6 watch below video to learn how to use it..

Beware, this is how you could be snooped on in 2014 The United States National Security Agency, Prism, its clandestine mass electronic surveillance data mining programme government-sponsored is snooping. But you ain’t seen nothing yet. Here’re five ways you’ll probably get snooped on electronically, in India. 1. Call data records: This is the most likely […]

Does Safe Eject Is Really Preferable? Some of computers (like Mac) are always warning about disconnecting flash drives without ejecting, while Windows doesn’t seem to have a problem—in fact, external USB drive doesn’t even have an eject option. Does this mean it’s safe? How do I know when I actually need to eject a drive? […]